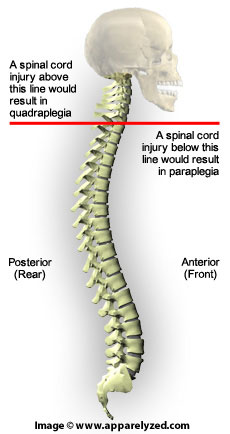 Put the two together, and you have “Quadraplegia”.

In Europe, the term for 4 limb paralysis has always been tetraplegia. The Europeans would never dream of combining a Latin and Greek root in one word!

In 1991, when the American Spinal Cord Injury Classification system was being revised, the definition of names was discussed. The British are more aware of Greek versus Latin names. Since Plegia is a Greek word and quadri is Latin, the term quadriplegia mixes language sources. Upon review of the literature, it was recommended that the term tetraplegia be used by the American Spinal Cord Association so that there are not two different words in English referring to the same thing.