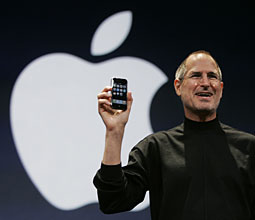 Since the company unveiled the iPod in 2001, there has certainly been more to the inventor of the Macintosh than just desktop hardware. Rumors had circulated for months that Apple might extend itself beyond music and computing into the massive cellphone market. With good reason: While Apple sells more than 60 percent of all MP3 players, there were only 135 million of the devices sold worldwide in 2006â€“compared with nearly a billion cellphones. Patent documents filed for a cellphone-related device were recently published by the U.S. Patent and Trademark Office. But Apple, true to form, stayed mum.