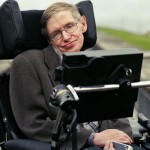 The software used to help Stephen Hawking communicate with the world has been made available by Intel for free online in the hopes it can help other people with similar disabilities.

Hawking, 73, who has a motor neuron disease and is almost entirely paralyzed, relies on the technology to speak. His speech system got an upgrade from Intel last year, allowing him to type faster, browse the Internet much easier and seamlessly switch between tasks.

The hope is the code for that software, called Assistive Context-Aware Toolkit (ACAT), will be leveraged by developers who are running Microsoft Windows 7 or higher to create new interfaces that could help people with ALS, Lou Gehrig’s disease, spinal cord injuries and other disabilities communicate with the world.

In Hawking’s case, his cheek sensor syncs with a switch on his glasses, allowing him to choose characters he wishes to type, which can then be processed by his speech synthesizer and spoken out loud from his laptop.

It also allows the cosmologist to use various computer programs and navigate the Internet. Intel said last year it was able to increase the efficiency of Hawking’s system by integrating predictive text technology. The software knows Hawking’s communication patterns, meaning he has to type less than 20 percent of all characters to convey what he wants to say.

By making the program open source, Intel said it hopes developers will be able to experiment and expand on the system by creating new interfaces and ways for sensors to connect with the system.